Compared to other dogs, the Jindo Dog has many distinguished traits.
As a result of these special traits it was protected as a national treasure in 1938, during the Japanese colonial period.
It is now protected under the Cultural Properties Protection Act. The Jindo Dog is a dog known through out our country.
Professor Mori, from Japan, explains that it is a native animal, descendants from the dogs raised by the people of the stone ages. However, during 1970 (30 years after the announcement of its origination), there are concerns of which the rumors, verbally passed down, is believed to be true by our people: that the ancestors of the Jindo Dog are the Mongol dogs or dogs from Song dynasty, China.
Considering these points, we wish to make clear that the Jindo Dog is our nations native dog as a result of document analysis and scientific research. 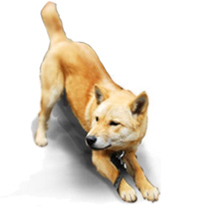 The document can be grouped into two: the accounts given by the Japanese and the recent documents written by our people. Included in the documents are the accounts of professor Mori, from Japan, who by comparing the excavated skull of a dog came to the conclusion that the Jindo Dog is a descendant of the dogs raised by people of the stone ages. Professor also writes that due to the island like location and also the inconvenience of travel, there would have been a minute inflow of other species allowing the possibility of pure breed Jindo Dog to exist. 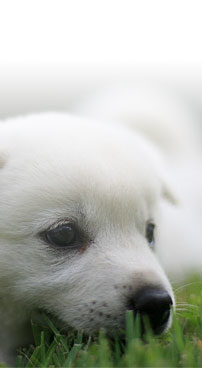 In relation, Lee Sang-oh (Hunting episodes, 1971) supports professor Mori and others with the statement that, prior to AD (Anno Domini) when the dogs from China settled, it became a native, and within the settlement the superior dogs were the Jindo Dog of Julranamdo and the Pungsangae of Hamkyungnamdo.
On the other hand, in Jindo, there are rumors verbally passed down relating to the origination of the Jindo Dog. One of those rumors are that during AD 960~ 1270, while the trades between Song dynasty and Goreo were active, the passing Songn dynasty ship were hit by the winds and waves and were sunk and the dogs carried on the ship swam to Jindo becoming the ancestors of the Jindo Dog. The other rumor is based on the Mongol dog of which, during AD 1270~1273, when the Mongol soldiers subjugated the special capital defense unit, they captured the Jindo people as slaves and after being released, 3 years later, the Jindo people brought home dogs which became the present Jindo Dog.
Besided the myths foretold, Park Jong-man (Study of the Jindo Dog, 1971) described that there was a warhorse ranch establish within the Jindo army and dogs brought over from Mongol to be used as watchdogs were the pure breeds of the Jindo Dog. Also, Lin Beung-chul (Hangu Jindo Dog, 1985) introduced the idea that the Jindo Dog is our native dog that resulted by the adaptation of Jindo’s climate and features. When we consider the Japanese history, during the reign of Indok emperor (beginning of the 5th century), there are records that a hawk was captured and tamed and used for hunting for the first time. It is written in the Yangeunggi (a record of hawks being reared) that 3 years later, a hunting dog of Baekjae and a hawk was brought to Japan. The recoded section, in our language, is the following:
“…The ambassadors of Baekjae brought a hawk and a dog as presents to our county. The ship that crossed the sea arrived in Walju Donhajin. The tamer of the hawk was Makwang and the tamer of the dog was Suekwang. The dog brought over had black spots. By the order of the Emperor, the ambassadors were welcomed at Donhajin. At the time, our country was inexperienced at taming the hawk and so the skills were learned from Makwang and at length the hawk was able to lead the dog in hunting…”

Lee Sang-oh (Hunting episode, 1971) made claims, though he did not support it with evidence, that a large group of hunting dogs was brought over from our country to Japan during AD 523~ 553 and the event took place 100 years after what was recorded in the Yangeunggi. Also there are records in the Japanese archives that the dogs were brought over to Japan from our country. It can be assumed, during each period of AD 679 and AD 685 (in the reign of the Chunmu emperor), horses and mules along with dogs were given from Shila dynasty to Japan. It was found through serological and biological study, with the dogs of our country (including the Jindo Dog) and the Japanese dogs, that our dogs were taken to Japan about 1300-2500 years ago. If the scientific evidence is consistent with the truth, it is clear that our dogs migrated from our country to Japan more than 15000 years ago. 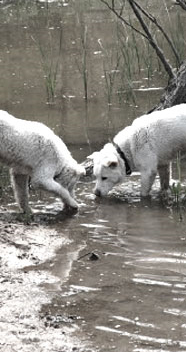 There are no set usage for dogs, however, dogs were first breed for hunting, but the current usage vary: house dog, farm dog, army dog. etc… The Jindo Dog has many excellent traits but because of its loyalty, obedience, bravery and hunting ability it is also know as a superior hunter. These special traits were acquired from adapting to nature and unlike the land dogs, due to the fact that they survived on an island, they are of pure breed and carry a wild instinct. It can be speculated that the special hunting traits were developed due to the scarcity of food and enhanced by the will to survive. With compliance to history and the records from Japan, it is difficult to deny the fact that the dogs that were breed by the people of the stone ages had crossed from main land China through Manju, to our country, and a multitude to Japan.
IWith accordance to scientific research and from the above enumerated, dogs crossing either from Baekjae and Shila dynasty to Japan had taken place way before the great wars of Songdaenan and Sambeulcho. The dogs in our country was mainly used as hunting dogs, and it is not difficult to make assumptions that the best of the hunting dogs were taken to Japan during the 5th and 6th century. What is clear here is that, during the 5th and 6th century, the dogs through out the country were mainly hunting dogs, the bloodlines and wild instincts of the Jindo Dog were much more pure compared to the other main land dogs and remains as the present Jindo Dog. The dogs that crossed to Japan during that period maintained their characteristics and became what is now, and difficult to distinguish from the Jindo Dog, Chujeungeon and Gyejugeon. As previously mentioned, according to the Yangeunggi, the dog that was brought over from Baekjae to Japan was spotted black. As a result, the Jindo Dog is not the descendant of the Songnara or the Mongol dog, but a comparatively well preserved native dog of our country and a descendant of the dogs breed in a unique environment of Jindo by the people of the stone ages. In a similar context, there are accounts in the thesis of Japanese Dog Ancestors and was concluded that the prehistoric domestic dogs were affected by other dogs and adapted to various environment of the urban area becoming the present dogs in Japan.
So far we have investigated from the accumulated documents and results from scientific studies the origination of the Jindo Dog. The evidences to support the rumors of the Mongol dog and the Pyorugyeun of Songnara are not clear. Therefore it is proven that the Jindo Dog are the descendants of the dogs that were breed by the people of the stone ages raised in a unique environment of Jindo where the bloodline and the wild instincts were preserved and that it is our countries native dog